JUST CALL US! Tired of quote forms that don’t let you properly explain your unique requirements? We specialize in creating the perfect solution to your print finishing requirements.
Let’s talk it over – 440-735-1333
For simpler services or our beautiful Classic
Wood Plaques, feel free to use our Quote Form

As we welcome in 2019, we wanted to post a quick reminder of all the services Classic Laminations provides, and let you know about a few updates on e...read more>>

Classic Laminations
In The News

Commercial printers in Northeast Ohio and throughout the Midwest to receive significant first-time customer discount when partnering with Classic Lami...read more>>

Classic Laminations is the leading provider in Cleveland, OH for premium print finishing and laminating services, offering thermal and adhesive processes for projects of all sizes.

For more than 4o years, Classic Laminations has been trusted by companies and artists throughout Cleveland and North Eastern Ohio to provide industry leading services. Our company proudly offers a myriad of services for print finishing.

Laminating is and will always be our core component of business. Customers have trusted our experience and knowledge for more than four decades. We consistently provide top-of-the-line service for our clients’ digital print projects. Digital imaging has numerous nuances and often require special, more aggressive laminates for this quickly expanding medium. For the best results you can count on, turn to Classic Laminations!

Laminating is the ideal choice when it comes to both protecting and extending the life of your medium. Our eight hot laminators and two cold laminators allow us to complete even the most time-sensitive projects at an affordable and cost-effective rate!

Our equipment is built to handle lamination for many types of substrates with widths up to 60 inches for hot laminating and 54 inches for cold laminating! We apply your choice of laminate finish on one or both sides of your piece. We also stock a wide variety of film and adhesive calipers ranging from 1.2 to 15 mil which allows us to fulfill all client requests!

Because not all laminating films are created equal, we are experts in matching the ideal film to the requirements of your unique project needs. Choose from gloss, matte, satin or textured finishes. Other options include translucent or opaque films in colors, including blue, yellow, red, black and white. We can over-laminate your wide format prints and give you the optimal laminating film for your digital printing needs.

Classic Laminations has every type of job covered from small to large projects for schools, offices, and virtually every industry. Our experts will work closely with you to meet your deadlines with most jobs completed in as fast as 48 hours. Premium rush service is also available for time-sensitive projects!

We specialize in fast, affordable project laminating, including:

Interested in learning more about the many different processes, finishes and laminating options available at Classic Laminations? Contact our experts today for a free project quotes!

The hot melt adhesive on thermal laminating films requires heat combined with pressure to adhere in the laminating process. The adhesive activates when heated to a certain temperature and bonds to the paper stock and printing inks. Our hot laminating processes work especially well with paper substrates and some synthetic stocks such as Kimdura® and Teslin® and with offset printing inks.

No heat is required, only pressure to laminate the film to your project. For this reason, it is often used to laminate heat-sensitive synthetic stocks such as Styrene and Vinyl. Cold laminating films have better resistance to UV light and will therefore better protect your printed piece from fading. Our cold processes also have better adhesion to most substrates. 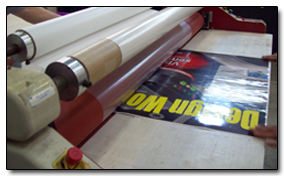 There are several different plastic polymer film types available and each one has its benefits. These are all important when doing projects for card lamination services or poster laminating services in volume. Classic Laminations provides laminating films made from the following polymers:

This is the most popular over-laminating film. It is most known for being extremely durable, UV and weather resistant. It is also difficult to scuff or scratch. Our polyester films resist heat, most solvents, and oils while maintaining good gloss and clarity. Common uses include menus, dust jackets and case-bound covers that need extra protection.

Often called “lay flat” or “curl free” film, nylon is able to breathe with the paper it is laminated to, resulting in flat sheets, even during humidity changes, particularly when laminating one side only. Nylon has excellent scuff and scratch resistance and can be slightly more expensive than polyester.

These films are specially designed to accept gluing and foil stamping and are often used to make pocket folders and folding cartons. This finish is slightly more expensive than polyester.

This is an extremely durable film that is very scratch resistant and non-glare. Polycarbonate is primarily used for trade show displays, mouse pads, and floor graphics.

These adhesives are designed to melt at lower temperatures and therefore cause less ink fading or discoloration of some wide format inkjet inks.

“Cold” or pressure-sensitive adhesive laminating films will protect your printed piece from ink fade due to UV exposure. This process protects up to four times longer than thermal laminating films.

These are films with a “dull” or non-glossy appearance. It has low light reflectivity and therefore reduce glare, making it easier to read text. Perfect for trade shows and other displays with lots of text. Matte is more expensive than gloss.

This is the most popular finish at Classic Laminations. Use this to accentuate your printed piece, and the gloss will make colors appear more vibrant. The downside is there is more glare, so it can make it more difficult to read text.

This film has a matte surface that offers a very unique look and feel. It creates a haze-free matte finish that will not distort graphics or shift colors. The soft velvet feel, combined with added scuff resistance, makes it ideal for high end applications of all types.

This film can be written on using dry-erase markers, and then wiped clean with a cloth or other dry eraser.

There are a variety of embossed finishes available in laminating films such as linen, pinseal, and leatherette. These finishes add a tactile sensation to your printed piece that will help to draw in and hold your customer’s attention.

When you need your message protected and easy to read, this laminating film is a great option.

Extra care must be taken when laminating digital printing projects. There are numerous variables to consider such as the type of paper, toners, copier/printer and fuser oil. Generally, a low-melt super bond adhesive is used to achieve proper adhesion.

It’s important to choose a print finisher that tests each job during the laminating process to ensure the adhesion meets expectations. That is why we pride ourselves on individually testing each job to make sure we have the proper laminate adhesion. Our success in laminating digital printing has resulted in customers coming to us from outside the Cleveland and northeast Ohio area.

This refers to either of two situations: a) the laminating film and adhesive separate from the printed piece, or b) the laminating base film separates from the adhesive as a result of poor bond formation during manufacture of the film.

This term only applies to two-sided laminates. This refers to the laminating film extending beyond the edge of the printed piece so that the top and bottom films are bonded together, totally encapsulating and protecting your printed piece from moisture and dirt. It may also be referred to as “encapsulation.” The corners can then be rounded if desired for an even more finished look.

The process of impressing an image onto the surface to achieve a raised pattern on the printed piece.

Total thickness or caliper of a particular film construction including its individual layers. Measured with a micrometer specially designed for films.

The laminating film does not extend beyond and is flush with the edges of the printed piece.

Microscopic bubbles under the film caused by entrapped air between the substrate and adhesive. The laminated film appears streaky and cloudy, often in an oval or football shape.

A type of laminating machine that simultaneously applies film to both sides of the printed piece. The laminating film is activated by passing over stationary heaters called “shoes.” Economy-grade polyester films are commonly used on heat shoe laminators.

A plastic film bonded by heat and/or pressure to a substrate, often a paper printed piece, for protection and appearance.

Instrument used to measure the thickness of papers and films.

A term referring to a specific class of synthetic polymers, including polyethylene and polypropylene. They have very low surface energy, very good chemical resistance, are chemically inert, and lose strength at high temperatures.

A printing industry unit of measurement used in typography. There are 12 points to a pica, and one pica is approximately 1/6-inch.

It is often the abbreviation for “Point” and used for describing paper-stock thickness or caliper or as a synonym of mil and thou (one thousandth of an inch). Paper that is 10 pt equates to 10 mil laminating film. In typography, the definition of point has changed over time. A point (commonly abbreviated pt or PT) is the smallest unit of measure, being a subdivision of the larger pica. The traditional printer’s point from the era of hot metal typesetting and presswork varied between 0.18 and 0.4 mm depending on various definitions of the foot. Today, the traditional point has been replaced by the desktop publishing point (also called the PostScript point), which has been rounded to an even 72 points to the inch (one point equals 0.3527 mm or 1/ 72-inch). In either system, there are 12 points to the pica. Point size is measured from the top of the ascender to the bottom of the descender.

A term describing air pockets trapped between the printed piece and the adhesive on the laminating film.

Refers to heat-activated adhesive that has been forced out at the edges of the laminate. This effect can be minimized by using the lowest practical laminating temperature.

A term used to describe white lines in the film caused by entrapped air between the film substrate and adhesive layer of the laminating film.

A material to which an adhesive is coated; for example paper or polymer films such as polyester, polypropylene, nylon, or polycarbonate.

A printer’s measurement tool calibrated in picas and points.

A thin coating applied to a printed piece to enhance appearance (such as gloss) and to provide minimal protection.
Back to top

Often called their "Secret Weapon", printers have found that virtually no job is too large or small, and that a custom job is never outside the reach of Classic Laminations.

“One of our goals is to find new ways to give our clients a competitive edge. They expressed to us that their end customers demand a turn-key printing, fulfillment and shipping program…”

With the rapid growth of wide format printing, due to equipment technology advancements, one of the most popular services that Classic Lamination now provides is mounting.

Subscribe to Printer Profits Newsletter
Be the first to know about services and amazing monthly offers that will profit your printing business.